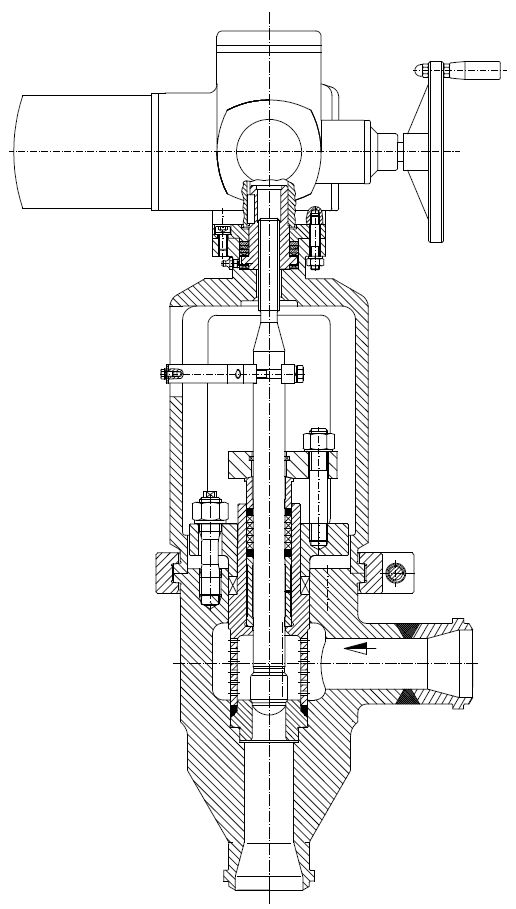 Spraywater Stop Valves of ASV type isolate injection water in a controlled way to the connected fittings and/or coolers. The injection water serves as a hot-steam temperature control. In order to achieve a good adaptation for each application, the injection valves are available as single- or multi-stage type. However, they can be used as stop valves also for other media.

Normally the spraywater stop valve is designed as a single-stage valve type. In case of special applications, i.g. very high pressure differences, the valve is available as a multi-stage seat/cone version. The illustration below shows the design of a four-stage valve.

The stable and drop-forged design of the valve body, the wear-resistant construction of seat and cone, as well as the low-friction stem sealing which can be readjusted are features to be underlined. Together with the casing seal, also the stem seal consists of pure graphite. Body and seat seal form a static double sealing which is positioned in the line of the main power direction.

Valve cone and seat are ground-in sealed during manufacturing. During operation, these parts are protected against coarsely foreign particles by a perforated cylinder which is installed in the casing cover. In order to protect the unit against fine particles, it is recommended to install a particle separator upstream.

All materials are according to DIN or ASTM. For the main parts of our valves we use standard material as listed below or according to customer specifications.

We use cookies on our website to give you the most relevant experience by remembering your preferences and repeat visits. By clicking “Accept All”, you consent to the use of ALL the cookies. However, you may visit ""Cookie Settings"" to provide a controlled consent.
Cookie SettingsAccept All
Manage consent

This website uses cookies to improve your experience while you navigate through the website. Out of these, the cookies that are categorized as necessary are stored on your browser as they are essential for the working of basic functionalities of the website. We also use third-party cookies that help us analyze and understand how you use this website. These cookies will be stored in your browser only with your consent. You also have the option to opt-out of these cookies. But opting out of some of these cookies may affect your browsing experience.
Necessary immer aktiv
Necessary cookies are absolutely essential for the website to function properly. These cookies ensure basic functionalities and security features of the website, anonymously.
Functional
Functional cookies help to perform certain functionalities like sharing the content of the website on social media platforms, collect feedbacks, and other third-party features.
Performance
Performance cookies are used to understand and analyze the key performance indexes of the website which helps in delivering a better user experience for the visitors.
Analytics
Analytical cookies are used to understand how visitors interact with the website. These cookies help provide information on metrics the number of visitors, bounce rate, traffic source, etc.
Advertisement
Advertisement cookies are used to provide visitors with relevant ads and marketing campaigns. These cookies track visitors across websites and collect information to provide customized ads.
Others
Other uncategorized cookies are those that are being analyzed and have not been classified into a category as yet.
SPEICHERN & AKZEPTIEREN